Coolers are often taken on picnics, and on vacation or holiday. Where summers are hot, they may also be used just for getting cold drinks home from the store, such as keeping ice cream from melting in a hot automobile. Even without adding ice, this can be helpful, particularly if the trip home will be lengthy. Some coolers have built-in cup holders in the lid. The days of placing drinks in the cooler and filling it with ice are now in the past. They are usually made with interior and exterior shells of plastic, with a hard foam in between. They come in sizes from small personal ones to large family ones with wheels. 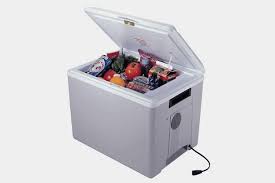 Thermoelectric coolers work like conventional refrigerators. However, they utilize the Peltier effect which produces a temperature difference that transfers heat between electric junctions. Thermoelectric coolers typically can drop the temperature by about 40 °F or 22 °C below ambient temperature, or can raise it by at least that much, this is really a function of the effectiveness of the boxes thermal insulation. Some better units even have digital thermostat controls. They do draw a significant amount of power, however, and can drain a non running car’s battery so much so that it cannot start. Most electric coolers have an under voltage shutoff at around 10 or 10.5 volts to prevent this. Many come with power adapters, which use an electronic transformer to convert AC mains or line voltage down to 12 volts, with a lighter-like socket for the cooler’s cord to plug in. Some also have a crossover-connection device to reverse the current for heating service.

Electric coolers have a unique advantage as they are portable, require less power, and have more accurate motor cooling. These features combine to give electric chests are unfair advantage.

The Best Electric Cooler there is are listed below :

Best Electric Cooler’s to look out For 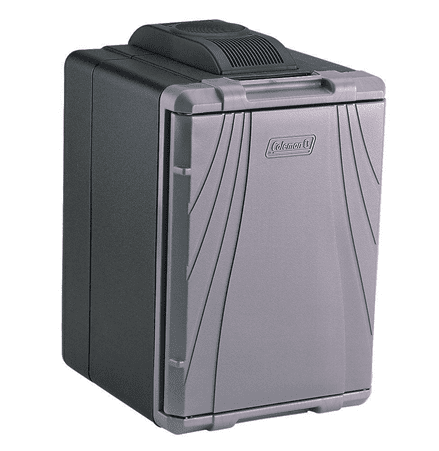 Coleman comes in different shapes and sizes. The 40QT is portable to fit into the back of your car without hassles. It works like a mini-fridge that you can tote with ease. Holding up to 44 cans of soda, it will suffice for a day trip.

These coolers are known for their tough and rugged rotomolded coolers and their excellence has just extended to the future of coolers. Impressively, Engel marine are pushing more than just an electric coolers but integrate solar functionalities as well.

Rotationally molded (roto-molded) coolers have become popular in recent years. Roto-molded coolers are manufactured using a process called rotational molding, a process by which a heated and softened material is applied into a slowly rotating mold. The mold continues to rotate during the cooling phase, producing a thick and uniform final product. In the case of roto-molded coolers, the heated liquid plastic is applied over a thick layer of insulation. The resulting product has no seals or imperfections and is much stronger and more durable than traditional coolers.

What is the Best Iceless Cooler?

Top picks for the best thermoelectric cooler just incase you want to purchase one.

How Cold Does an Electric cooler Get?