You can’t argue with the success of a car that’s been satisfying drivers since 1966. So when Toyota decided to introduce a hybrid version of its perennially popular Corolla—now in its 12th generation—it tapped into its experience with the Prius to create an economical and attractive hybrid trim that creates some stiff competition in its class. Add in abundant standard driver assists and exceptional fuel efficiency, and you have a shoo-in for our Editors’ Choice. 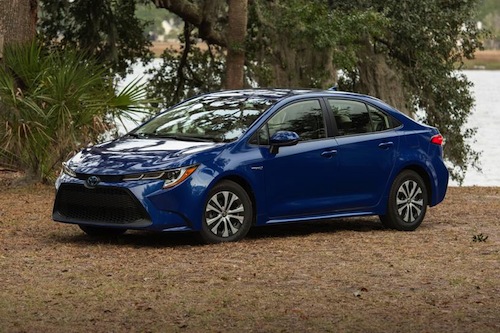 If you’re looking for an economical and fuel-efficient hybrid vehicle for safe, reliable commuting, it’s hard to beat the no-frills 2020 Toyota Corolla Hybrid.

Toyota’s new Global Architecture mimics the revamped styling of the 12th-gen standard Corolla, revealing its hybrid underpinnings with a badge display on the exterior. Built on the Prius hybrid power train, the Corolla produces 121 horsepower and 105lb-ft of torque.

The rest of the engineering mirrors the non-hybrid Corolla, except for the 1.8-liter Atkinson-cycle inline-four engine and a pair of electric motors also cribbed from the Prius. There’s a 1.3kWh battery stored beneath the rear seats. 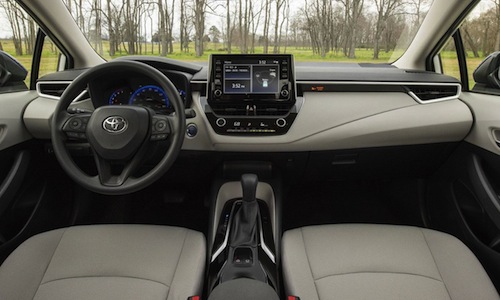 Toyota tweaked its continuously variable automatic transmission (CVT) to take some of the elasticity out of its response. Next to the CVT’s gear lever are two buttons to switch vehicle mode, allowing for EV-only operation. An extra cubby is tucked in front of the shifter with a USB port directly next to it.

The sedan steals its looks from its awkward cousin, the Prius, which has a loyal fan base that has embraced its unique design. While its entry-level heritage is apparent in the exterior design, the front fascia, identical to the gas-powered Corolla, adds a touch of elegance. The interior is clean and contemporary, but with a mostly plastic interior, it still reflects a focus on frugality over frivolity.

There is no embedded navigation system, but Toyota’s Scout GPS link is available with a three-year trial and you can download Toyota’s Entune 3.0 App Suite Connect that provides directions as well as iHeart Radio, Yelp, LiveXLive, NPR One, Fuel, Sports, Stocks, Traffic, Weather, and Wi-Fi access with a six-month trial. A USB port for charging devices is located under the center armrest. Unfortunately, Toyota didn’t add rear seat USB ports for occupants, which will lead to competition for that single armrest charger. 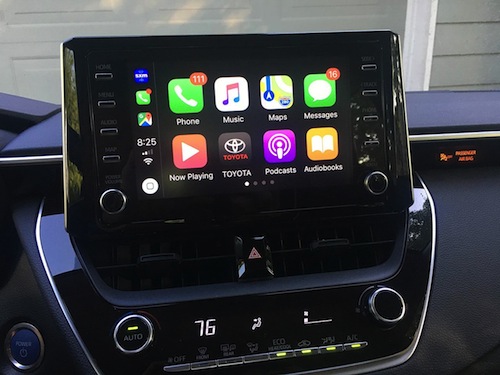 The center dash has an infotainment system with an 8-inch touch screen that includes a Wi-Fi hotspot, Bluetooth for hands-free phone and wireless audio, and a six-speaker stereo. Apple CarPlay is included, as well as Amazon Alexa, but not Android Auto. Plugging into CarPlay requires using a USB port under the dashboard on the passenger side.

The Corolla Hybrid has three driving mode: Normal, Power, and Eco. While remaining in the Eco mode can save fuel, the Normal mode provides more reliable handling when accelerating into traffic. A Power mode is included, but provides no noticeable bump in performance. A 2.0-liter, 169-hp gas-only Corolla can get from zero to 60mph in 8.0 seconds. 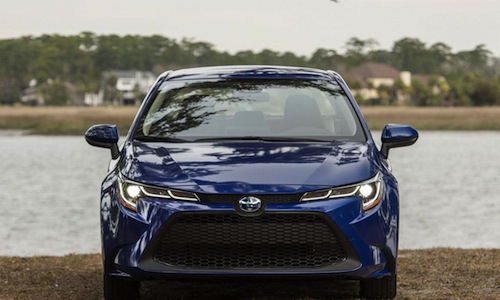 The switch between battery and gas engine is undetectable, although the power train exudes a faint noise occasionally when stopped. The Yokohama Avid GT tires effectively absorbed most of the noise on the freeway, churned up by weather and trucks and the exterior ergonomics glided through environments that exceed 45mph.