A mobile phone that has got a decent camera, a very good battery life, and a big screen in an easy to hold body is what describes the Sony Xperia 5, which is an Android smartphone marketed and manufactured by sony. Regardless the Sony software still needs work, and the handheld device does not come with a wireless charging. On the bright side, Sony has delivered Android 10 on this phone in a relatively timely fashion. It runs Android well and a user won’t have to deal with any slowdowns. 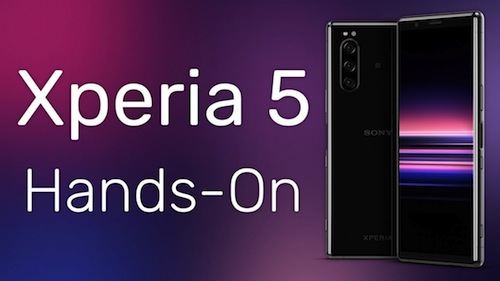 The Xperia 5 heavily resembles the Xperia 1, but has a smaller form factor. Like the 1, it uses aluminum for the frame and Corning gorilla glass 6 for the screen and back panel. The button layout is retained, with the volume, power and shutter release buttons as well as the always-on fingerprint scanner all located on the right side of the phone. However, the card slot has been moved to the left side as opposed to the Xperia 1’s top-mounted tray.The earpiece/top speaker, front-facing camera, notification LED and various sensors are housed in the top bezel. The bottom edge has the primary microphone and a downward-firing speaker next to the USB-C port. At 158 mm × 68 mm × 8.2 mm, the Xperia 5 is 9 mm shorter and 4 mm narrower than the 1, but has the same depth. The decrease in dimensions also results in the device being lighter at 164g (5.78 oz); it weighs 14g (0.5 oz) less than the 1.

The Xperia 5 is only available with 128 GB of UFS internal storage, lacking the 64 GB model of the 1, and microSD expansion is supported up to 512 GB with a hybrid dual-SIM setup.The camera system is similar to the Xperia 1 in terms of hardware (a 12 MP primary lens, a 12 MP telephoto lens and a 12 MP ultra wide lens with an 8 MP front camera), but is missing the 960fps slow motion capabilities due to lacking a stacked memory main sensor. However, Sony improved the Eye AF autofocus allowing it to work at 30fps. The battery is 6% smaller than the Xperia 1 due to the reduced physical footprint, with a 3140mAh cell which can be recharged at up to 18W via the USB-C 3.1 port. The 3.5mm audio jack is still absent, but an active external amplifier is still included; connectivity options mostly remain the same.

on the software side, The Xperia 5 runs on Android 9.0 “Pie”, along with Smart Stamina battery saving modes and Sony’s proprietary multimedia apps. It features an improved Side Sense. It works through a pair of touch-sensitive areas on either side of the phone. A tap or slide triggers various actions set by the user, most of which configurable including the sensitivity of the touch areas.

To use the Xperia 5, you must agree to:

The following agreements are optional:

The sony Xperia 5 sells at a range or (NGN) 253,387naira and can be purchased at any popular E-commerce outlet close to you.