The sony brand of tablets, are arguably among the most reliable, efficient and durable tablets in the market space.

Their devices are quite easy to use, and they are user-friendly. For the most part, Sony tablets are known for their battery strength and fast processor.

Sony tablets come manufactured in different types. Like they vary in sizes, RAM sizes and storage memory, battery strength and screen resolution. Ofcourse they vary in prices too. 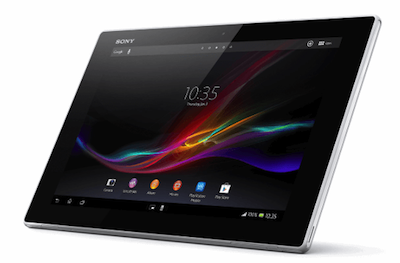 In this article, we will look at various sony tablets available today.

This device is graded among the most successful sony tablet ever released. Launched in 2013, although they are fading out of stock really fast too. Still a top choice for sony fans all the same. The sony Xperia z tablet is a single Sim tablet that accepts a micro-sim. As connectivity options include Wi-Fi, GPS, Bluetooth, NFC & 3G. Meanwhile, sensors on the tablet includes proximity sensors, compass(magnetometer), Accelerometer and Ambient light sensor. Below are some specifications of the tablet:

Price in Nigeria : The Sony Xperia Z price in Nigeria is on sale from (NGN) 63,000 Naira to (NGN) 90,000 Naira depending on your location or the store or platform you choose to buy from. Although prices may vary, it might probably be even less than the cost stated on here. You never really know this things.

This sony tablet was released in 2015, it made some high sale at that time. So far so good, it remains the favorite because of it’s 2GHz octa-core processor and 32G memory storage. The tablet runs on an Android 5.0 Operating system and it’s battery life is powered by 6000mAh. Let’s see the specifications below :

This device comes with an 8-inch display with a screen resolution of 1920 by 1200 pixels. The sony Xperia z3 tablet is among the most sort after tablets when it was first released and it still has that market space value till today. A breakdown of the basic key specifications are listed below :

The Xperia z2 tablet was released in 2014, it is user-friendly and it makes use of 6000mAh battery life span. The device operates on a 3GB RAM size, below are the key specifications :

Sony Mobile (previously known as Sony Ericsson Mobile) is a subsidiary of the electronics giant Sony Corporation. The company’s Xperia range that started off with Windows Mobile OS has moved to Android and is a significant part of the smartphone market today. The company markets some of its phones as waterproof and dust proof.

Sony Interactive Entertainment is a Sony subsidiary founded in 1993, which went on to make the PlayStation series of gaming consoles and critically acclaimed and successful video game series such as God of War and Uncharted.

Sony’s latest mobile launch is the Xperia Z4 Tablet LTE. The tablet was launched in March 2015. The tablet comes with a 10.10-inch display with a resolution of 2560 pixels by 1600 pixels. It is a must have if you just love the sony brand.