The premier league is the most watched league in the world and while I was seeing Manchester United play against Liverpool yesterday which turned out to be a funny game considering the score line, something caught my attention and it was the sky spider camera. 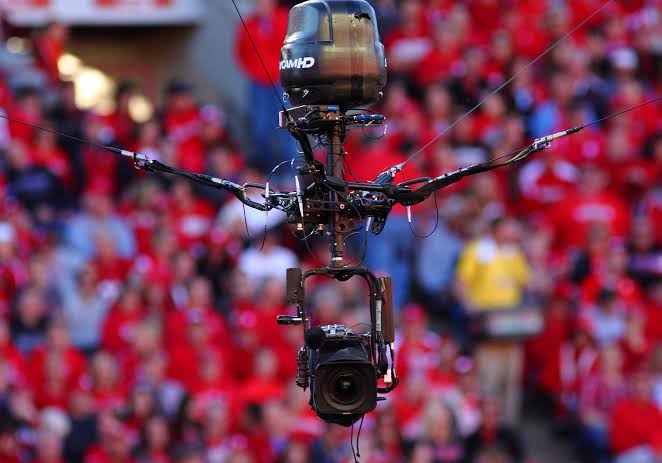 Skycam is a controlled, stabilized, cable suspended camera system. This cam system is moved through three dimensions in the open space over a playing area of a stadium fully controlled by a cable drive system.

This is how it works the sky spider camera drone uses a state of the art camera suspended from four wires, one in each corner to follow the action right before your very eyes.

This cam pan 360 degrees while keeping level and it also has a zoom function and image stabilizers. The zoom in function is so so lit.

For most professional football game the standard setup is just like this ; two canon 1D x cameras as the primary cam for accurate captures.

(The canon vixia HF) because it is the best video camera to record football games, why this is so is because the camera can autofocus at anytime on anywhere within 84% of the screen.

One of the primary sky cams placed on a 400mm lens and the other on the ground.

Each football match is a major production, with broadcasters deploying over 20 cameras at every point with over 180 employees for one game.

A skycam is different from a drone. This is a well wired suspended remote controlled camera that provides a bird’s eye view of sporting events.

Although drones perform similar actions but drones do not need cables to remain on air.

The sky cam is the original flying camera, and you’ve probably seen it a couple of times, and you probably might have seen amazing zoom in footage created by this spider cam pub like device moving around stadiums and other venues for years now.

They provide amazing camera views with quality, these views would otherwise be quite nearly impossible to capture on a normal instance. 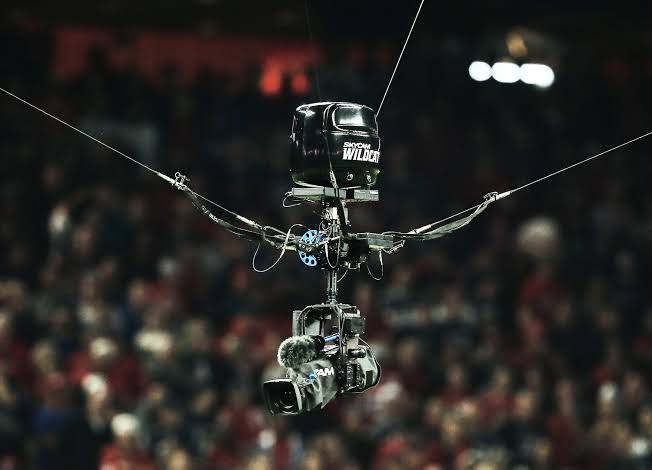 If you are still not sure what skycam is, from now on during any football match or any major sporting event, you will definitely catch a glimpse of the airborne device gracefully floating above the field, hanging from multiple ropes. When you see that “ that’s the skycam right there”.

Skycam is a registered trademark and it has been on limited use since introduced but now we will begin to see more widespread of the device use from the 21st century and centuries ahead.

The central control is an industrial grade and it uses the Linux operating system computer workstation which provides cam flight control and video control.

Both the pilot (ie the one who files the spar in 3D space) and the operator ( the one who controls the camera pan, tilt, zoom and focus) use this device for controlling the overal video shot effectively.

Now just because you see the brand name is soft and easy does not mean that these cameras are cheap to deploy. Setting up skycam spider drone costs thousands of dollars.

The cost of the skycam in Nigeria goes on sale for the price of nothing quite over $30,000. This is why you always see them during major events that draw a large number of viewers and also aid to generate funds in order to be able to pay for the use of the sky spider cameras. 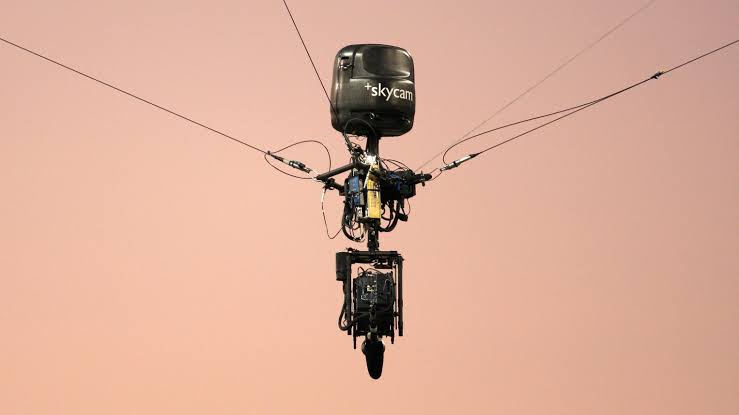 Why the Sky Cam ?

The skycam system has been used in more than 80 different venues around the world.

This beautiful device takes at most several individuals two whole solid days to setup and place ready the core parts that enable the skycam fly for a broadcast.

The central computer system uses a natural software to control each aspect of the skycam system including motion,and obstacle avoidance.

Skycam has broken new grounds in tv broadcasts because they bring out of the world impossible like angles views possible for sports, entertaining viewers and fans, capture the rarest lovely moments and make these touching experiences more powerful than most people can seem to fathom.

Lastly, you can become a franchise holder for the skycam brand from any region in the world and be able to set up your own portfolio.

This brand is very supportive and you can build your social sites around it efficiently.