This phone is actually quite the catch. It’s got a slogan termed ” Dare to Leap” and it comes in hot with a dimension of H: 156.1 mm (6.15 in)W: 75.6 mm (2.98 in)D: 8.3 mm (0.33 in) which makes it one device to compete with in the market. It has become one of the best budget smartphone sellers right now, and it’s got so much value for money. So as the name indicates, it is the successor of the Realme C2. The phone comes with a MediaTek Helio G70 chipset under the hood and packs 3GB of RAM and 32GB of storage space. The phones display is a 6.5-inch LCD panel offering a resolution of 720 x 1560 pixels. On the back, you get a 12MP + 2MP dual-camera setup. The phone also features an 5MP front camera built into the notch on the display. The phone comes with a 5000mAh battery which is great news as it translates to a good two days of use. 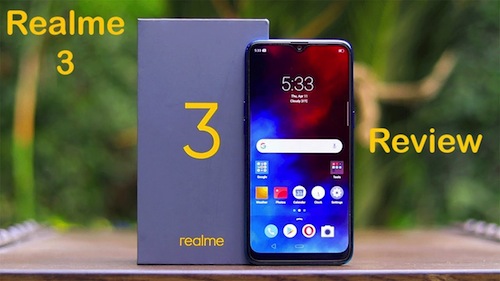 Realme is a brand that has built a name for offering affordable handsets with decent specifications, and this latest phone release definitely lives up to the expectations. The Realme C3 was introduced with Helio G70 chipset and Realme UI, effectively making it the first Realme smartphone coming with the in-house interface out of the box. 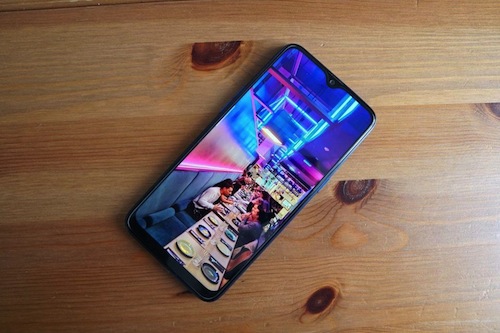 Realme has equipped the C3 with a bigger display than its predecessor. It measures 6.5 inches diagonally and has a 20:9 aspect ratio. This aspect ratio makes the smartphone tall and slim, so it’s relatively comfortable to hold and use. The bezels are thin on the sides but the bottom chin is thicker. Like most other Realme smartphones in the market, this one also has a dewdrop notch which houses the selfie camera. Right above it is the earpiece, which is finished in black and blends in with the display. The Realme C3 packs a 6.5-inch IPS LCD panel and there is a water drop notch at the top. The screen offers an HD+ resolution of 720 x 1560 pixels and it has a density of 276 PPI.  Another amazing thing is that the display is also an LCD with HD+ resolution, but at first glance, the content on the screen was decently visible under strong sunlight. The bun also helps the design on the back – Realme called it Sunrise Design for a reason. The phone looks lovely and appears to have sunbeams shining out of the camera module.

Camera results on Realme phones have always been better than its competitors and that is the case with the Realme C3 as well. Still the Realme C3 sports a dual-camera setup at the back consisting of a 12-megapixel primary shooter with an f/1.8 aperture, and a 2-megapixel depth sensor. At the front, it has a 5-megapixel selfie shooter. The camera application is unchanged compared to previous Realme phones, and has Portrait, Time-lapse, Slo-mo, Expert, and Pano modes in addition to the photo and video modes. It also has quick toggles for HDR. Both front and back cameras can shoot 1080p videos. All the processing power of the Realme C3 comes from the MediaTek Helio G70 chipset, which is fairly decent in terms of performance at it’s price. 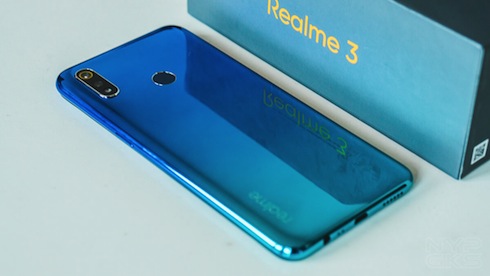 Realme 3 utilizes Gradient Unibody Design, with matched color. It is equipped with MediaTek Helio P60 (International Edition) processors. It is equipped with a 5000mAh battery. The realme 3 has an improved hardware configuration over the previous models, and its rear dual camera has been upgraded to a combination 13MP main camera + 2MP secondary camera, with the primary camera’s single pixel size being 1.12um, with a f/1.8 aperture and 5P lenses.
On the software side, Realme 3 comes equipped with the color os 6.0 and a borderless design. It has improved more than 20 system functions over the realme 2, based on user suggestions and feedback from social media and the realme community.

Connectivity-wise, you get Wi-Fi 802.11 b/g/n, Bluetooth 5.0, and A-GPS. The phone features a micro USB port for charging and Realme has retained the 3.5mm headphone jack. While the battery is quite large at 5000mAh, it will take a while to charge it to max capacity as it does not supports Fast charging.

The smartphone sells at the rate of (NGN) 50,000naira although price may vary depending on the mobile retail outlet. Still it can be purchased at any popular E-commerce store close to you.

Other Features of the Realme C3