The Nokia 5.3 is part of the smartphone released by HMD recently. They announced the smartphone with a large screen display size which is a big win to gamers and entertainment lovers. 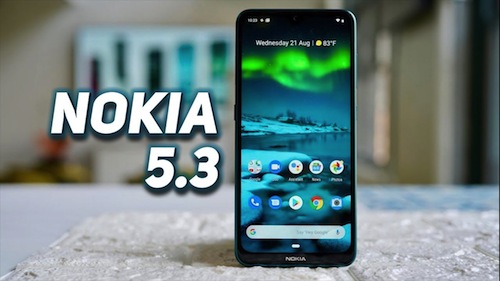 The phone is powered by Qualcomm SM6125 Snapdragon 665 Octa-core processor and Adreno 610 GPU. The smartphone comes with sensors like Fingerprint (rear-mounted), accelerometer, and proximity.

The phone has a powerful battery of a non-removable Li-Po 4000 mAh + Normal charging 10W. The smartphone is equipped with three variants for RAM- 3 GB, 4 GB, and 6 GB while there is 64 GB internal storage which can be extended with help of microSDXC.

The smartphone runs on the Android 10.0 operating system and packs with quad-camera that consists of 13 MP (wide), 5 MP, (ultra wide) + 2 MP, (macro) 2 MP (depth). The screen size of the smartphone is big enough to enjoy gaming as well as your daily work.

On the body, it packs an elegant 2.5D glass front and a scratch-resistant composite back cover for durability. It brings to light 3 striking Nordic-inspired colors – Cyan, Sand and Charcoal. On the side, you will be greeted with a dedicated Google Assistant Button.

You can easily activate it since it’s at your fingertip and it easily adapts with every use. This implies that the more you use it the more it adapts.

Shifting to the front, the Nokia has a water drop notch with a display screen size of 6.55-inch. Unfortunately, it has a 720p screen instead of 1080p panel.

These cameras promise to take perfect night shots and portrait pics making use of powerful AI imaging. The front camera is 8 MP sensor which is for selfies and video calling.

On the back, there are four camera set-ups that consist of 13MP f/1.8 primary sensor, a 2MP depth sensor, a 5MP ultra wide angle camera and lastly is 2 MP macro camera. 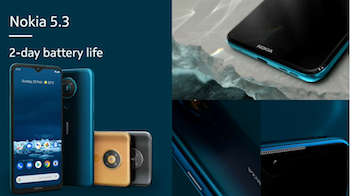 The Nokia 5.3 is powered by Qualcomm SM6125 Snapdragon 665 SOC based on 11 nm process technology. It also has an octa-core processor clocking at a speed of 2.0 GHz and Adreno 610 GPU for graphics.

It comes with 64GB inbuilt storage coupled with 3GB RAM and another model with a 4GB RAM, while the bigger one comes with 6GB RAM. They all have the same 64GB storage and it’s expandable via micro SD card.

The handset runs on the Android 10 operating system out of the box based on Android One. The good news is that users will be able to get Android 11 and Android 12 update on their phones with some security update for 3 years.

The Nokia 5.3 will sell at a price of about $219. In Nigeria, the smartphone will cost around (NGN) 80,000 Naira. You can purchase it at any popular e-commerce store close to your region.

Fueling the Nokia 5.3 is a 4000 mAh non-removable battery that comes with 10W charging. HMD equipped the phone with 4G LTE Network and other regulars features such as Bluetooth 4.2, audio jack, FM radio, and a rear-mounted fingerprint scanner.