The Anywhere 2S is designed to be a compact travel companion first and foremost—the entire mouse fits just how it should.

The materials should be cheap, but i just don’t know for a mouse, and it has a nice heft for something so small, even though it’s not at all heavy. 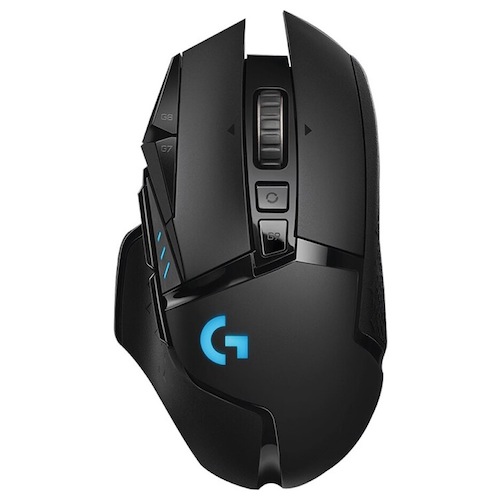 Though a bit pricey, it’s well-made, comfortable, and uses Logitech’s Dark field laser technology to track accurately on pretty much any surface, even glass.

The Anywhere 2S lives up to its name with a compact size and easy multi-device wireless paring, making it a top choice for travel-friendly mice.

Design & Display for the Road

Visually appealing, with a straightforward design, the rubber finger rests on both flanks vaunt cool geometric patterns, and the contoured metallic lines toward the back of the mouse give it a modern look. Our test unit is black, but the 2S also comes in white or teal.

The scroll wheel is ridged rubber in the center and metal on the sides, and can be pressed in to change its function.

One mode enables smooth motion for hyper-fast scrolling, moving as fast as your finger can spin the wheel to fly up or down. 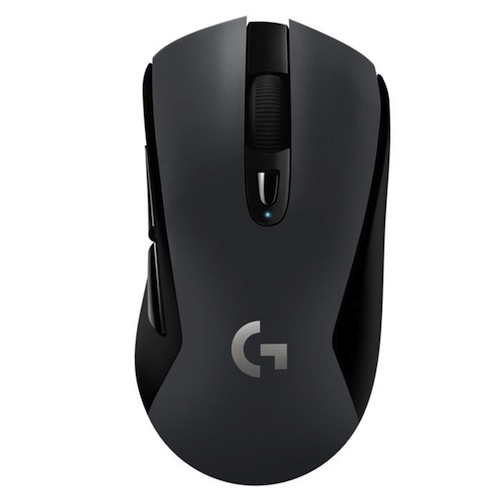 This is good for, say, flying through a long document or zooming back to the top of your Twitter feed, and it feels oddly satisfying.

A power switch on the bottom toggles the mouse on or off, and a small circular button allows you to jump between up to three paired devices.

Once you pair with a computer or tablet (the Anywhere 2S works with either Windows or Mac), you can press this button to switch between them on the fly, and three indicator lights above the button tell you which link is currently active.

You can connect with either Bluetooth or the included USB adapter, which uses 2.4GHz wireless, for a maximum range of 32 feet.

The software is very flexible, so you can make the scroll wheel pushes (or any of the buttons) perform specific functions like pulling up the calculator, raising the volume, or even executing a macro like Control-V to paste. All of this makes another of the software’s features, Flow, even more useful.

Flow allows you to move your mouse cursor between computers, so long as they’re on the same Wi-Fi network.

This works just like when you have multiple displays, which is pretty novel technology, and genuinely handy if you hop locations around the office, switch between a laptop and desktop to do your work, or need multiple devices to work out of a hotel room. 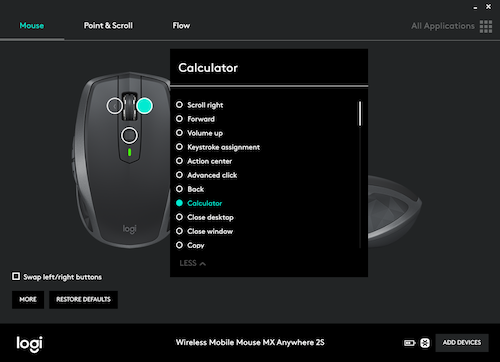 You can even copy text and files across two computers using the mouse—just drag them over to the other screen and paste, which is where the useful customizable button shortcuts are made even more helpful.

It takes a few seconds to transfer (more for larger files), but it removes the manual work of moving files with USB sticks, network drives, or emailing something to yourself.

Combined with the ease of wireless syncing and three-device pairing, hopping between machines to continue your work is made incredibly easy and efficient.

A micro USB port on the front serves as the charging port (a micro-USB-to-USB cable is included), and an indicator light beneath the square button notifies you if the battery runs low.

Battery life shouldn’t be much of an issue, though, as it’s rated to last about 70 days on full charge, based on about six hours of daily use.

That exact time will vary depending on usage but that’s the ballpark you can expect, and if you remember to plug it in even occasionally, you’ll run out of juice infrequently—possibly never.

The Logitech MX Anywhere 2 is a well-built, versatile mouse that lives up to its name with a travel-friendly design and a sensor that works on nearly every surface.

The Dark field sensor is genuinely useful if you often sit down for meetings or demos in an unorthodox spots, and its small size makes it easier to carry in a bag or pocket, or use on, say, a tray table.