The Lenovo Yoga Smart Tab is not your regular tablet, instead, it borrows some elements from the smart displays, featuring a couple of powerful speakers and it does support the Google Assistant. The smart display aspect is also enforced by the adjustable stand which besides allowing the device to sit flat, it also helps keeping the Smart Tab in a vertical position or allows you to hang it somewhere in your kitchen. The Lenovo Yoga Smart Tab is a 10.1-inch tablet. And if you wish to get a new Tablet? it probably could be for official use, entertainment or others, whatever it is think Lenovo yoga. 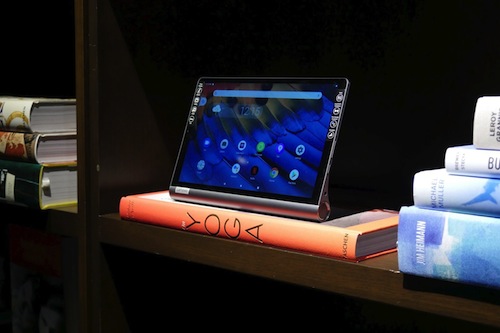 This fresh device is still a full fledged tablet, offering a good display, a great battery life and enough RAM for media consumption, but, since the smartphone always does it better, the smart display side of it could actually be enough to differentiate the Yoga Smart Tab from all the other tablets. It comes with a nice body that is not too heavy to carry around. User’s also get a good camera set-up both on the back and front plus a massive battery capacity on the inside. This tab is the most talked about Smart Tablet from the company. It was announced alongside other Tablets such as the Smart Tab M8 and Smart Display 7.

Lenovo has also made available built an Alexa-focused variant which is a bit different due to its detachable speaker dock. Thats just perfect. 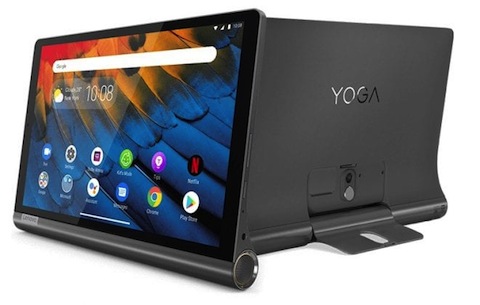 It has an attractive body design and features from the popular Yoga laptop line but sadly lacks a detachable or flippable keyboard. The keyboard would have turned it into two in one tablet. Lenovo is no stranger to innovation and it is often trying new things (the ThinkPad X1 folding PC prototype is one of the latest examples), so I was expecting that the Yoga Smart Tab will be different when put next to the other tablets available on the market. The Lenovo Yoga Smart Tab goes from 0.3 to 0.9 inches in thickness (the length and height being 9.5 x 6.5 inches) and it does weigh 1.28lbs (one of its main competitors, the Samsung Tab A 10.1 2019, weighs 1.01 lbs).

As for the Kickstand, it enables the Tab to be used in four modes; standing, sitting, reclining, or lying down while watching a movie on the display. On the overall, it measures 242mm x 166mm x 8.5-24mm in dimensions and weight 580 gram. The Lenovo Yoga Smart Tab has a large screen display size of 10.1 inches with an IPS LCD capacitive touchscreen. The screen has a resolution of 1200 x 1920 pixels, a 16:10 ratio, and 224 PPI density. It offers a 73.6% screen-to-body ratio. In terms of build quality, the Yoga Smart Tab feels solid, despite having its rear side made of plastic, but it’s worth noting that there was a small cracking sound when I pushed the plastic next to the speaker base which is made of metal.

The Lenovo Yoga Smart Tab has an 8-megapixel rear camera with autofocus which can capture 1080p videos at 30 fps and a 5-megapixel front-facing camera with fixed focus which should be enough for conference calls. The rear camera is decent in good lighting, especially if you choose HDR, so if you forgot your main camera at home or your phone and there is a cool shot opportunity, you can use the Yoga Smart Tab, but don’t expect extraordinary results.

The Lenovo Yoga Smart Tab is equipped with a Qualcomm SDM439 Snapdragon 439 chipset (dual-core Cortex-A53 clocked at 2.0GHz and six-core Cortex-A53 clocked at 1.45GHz), an Adreno 505 GPU, 4GB of RAM and 64GB of internal storage.
I do think that the RAM is enough and I do like that you’re are not limited by 64GB of storage (there is a microSD card slot), but the Snapdragon 439 + Adreno 505 GPU combo is not going to run resource-heavy apps or games. Through the software analysis the yoga smart tab from Lenovo is powered by the Android 9.0 Pie operating system. As for the memory, it has generous inbuilt storage of 64GB that is paired with 4GB RAM. The memory is expandable via a micro SD card up to 256GB. 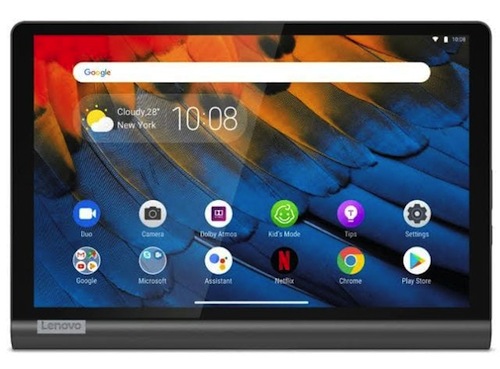 Lenovo has been very generous and it has equipped the Yoga Smart Tab with a non-removable Li-Po 7000 mAh battery more than the 6,150 mAh of the Samsung Tab A 10.1. There’s no news if the device has support for fast charging technology or not. However, it will surely last a full day when fully charged. Still it comes with built-in dual JBL Hi-Fi speakers for entertainment.

The Lenovo yoga smart tab goes on sale for the price of (NGN) 120,000 naira in Nigeria, while in Ghana users can get it at a price of 1,900 Ghs and 33,800 Ksh in Kenya. Still, prices may vary at mobile retail outlets. But it can be purchased at any popular e-commerce store close to your region.

Other Features of the Lenovo Yoga Smart Tab