It is truly a tiny creative powerhouse with 5stars added to rank the quality of this awesome device.

The ipad mini (2019) is Apple’s most totable ipad, and it’s deceptively powerful for its small size.
The new iPad mini is less versatile for work than the iPad Air, but it’s incredible for creative endeavors and gaming.
It has a bright 7.9-inch display that works with the Apple Pencil and a chipset that takes out the small tablet’s competition. Its price is equally deceptive, costing more than the larger ipad 9.7.

In this article, i will explore and discuss the iPad Mini 2019 specifications, review and price. 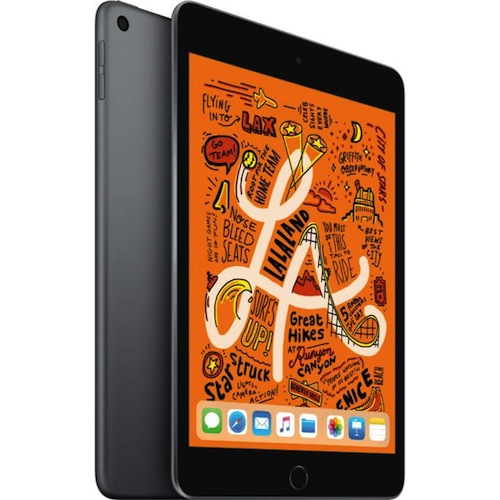 The Apple tablet is the first from its series to have support for Apple pencil. It’s a clear indicator that Apple listens to end users feedback and wants to cater to the needs of creators who desire a tablet with a smaller form factor to work and express their creativity.

The top is home to its earpiece and front-facing camera, while the bottom is home to one of Apple’s signature features that you won’t find on the latest device any longer.

This signature feature is the Apple Touch ID sensor, which is a fingerprint recognition sensor. As we do know security is assured and the top most mission stated by the apple company itself.

it is not far fetched that apple came out with the support for the second Generation Apple Pencil. This means users won’t get the comfort of the super Ergonic  latest generation Apple pencil’s presents as it was first released.

Another letdown perhaps or not is the fact that this Apple pencil bears a lighting connector and can be charged from the lighting port of the tablet, which may be stressful and not practical at times.

But we love apple always and always.

The front part of the iPad Mini 2019 is colonized by a setup that speaks old or we can say it comes from an old design. We have a 7.9-inch display surrounded by humongous bezels. The type that is unacceptable in 2019, unless it’s coming from an entry-level device. “Just saying”.

Similar to most iPads, the tablet features metal on the rear and glass upfront. The front panel is the major part of a classic piece that sells it off as an old looking device. Needless to say vintage can be the right word to use.

Obviously, the design isn’t a deal breaker, but it does just make the mini seem a lot less up-to-date than the tech inside it really is.

It doesn’t matter if you own any of the latest-gen iPads, the iPad Mini 2019 isn’t affiliated with any of the 2019 design trends. But it is still higher than most android tablets there is.

Apple’s Ipad mini (2019) makes for a great machine that’s a lot of fun, but what’s going on inside can’t overcome that the small screen isn’t as versatile as the Air’s. But, this could be the perfect tablet for you.

It features Apple A12 Bionic chip, Hexa-core processor, with a processor speeds of 2.5 and 1.6. Driving the graphics on this tablet is a 4-core graphics processing unit.

The iPad Mini 2019 features a 3GB RAM, 64GB or 256GB of internal storage. There is also a non-removable 5124 mAh battery. Charging this device is done through its lightning port.

With this hardware specification combo, you are assured of getting flagship device speed, owing to the fact that the specifications on the tablet bear similarities with apple’s flagships from last year.

About the software side, the iPad Mini 2019 runs Apple’s iOS 12.1.3, which is upgradable to iPadOS 13.1.2. The iPad OS is a new release from Apple, geared at making iPads some sort of laptop replacement.

Beyond the technology, the screen is both the source of the mini’s magic, and is the thing that might stop you buying it.

Though the mini supports all of iOS’s multitasking capabilities, including side-by-side apps, you won’t really want to use that specific option here, because it leaves both apps feeling too tiny.

You might pull a second app up quickly to answer an email or text, or to drag a file from one app to another, all of which is handy to have as an option, but you won’t want to try to work with two side-by-side.

This is a big contrast to the 10.5-inch Air, which revels in its productivity – it’s a really good size for side-by-side apps.

Setting Aside the design and build of the iPad Mini (2019), the camera’s are also a reminder of what was released on the iPad Mini from 2015. It’s a single camera game here for both the front and rear. Though the sensors have been retained.

Straight up, the iPad Mini 2019 makes use of a 7MP front-facing camera for selfies. This camera has an aperture of f/2.2. And It has support for HDR photos and can also record 1080p videos with frame rates maxed at 30fps. This is all we all need quality at its best.

Internet connectivity on the iPad Mini 2019 supports the 4G LTE as there is no support for 5G internet.

The iPad Mini 2019 has support for 4G sims from all major telecommunication networks provider in Nigeria, (MTN, GLO, Airtel, and 9Mobile).

The new iPad mini’s natural state is a way to express yourself anywhere, because it’s small and light enough that you never need to leave it behind. If you fancy yourself as having a creative mind, that’s genuinely powerful, and it could become your most valued tool.

In the past, the mini has also always had a focus on being a great iPad for kids to play on, and that’s true here to – the chip that can play Fort nite at its best, along with any other game, no matter how demanding. But the price maybe makes the 9.7-inch iPad a more tempting choice there (especially since its bigger screen will be better for the softness of the younger kids’ palm).

While the Battery life is pretty standard for iPads, though wildly variable, of course. 10 hours of web browsing or video is no problem, and 3D games will easily halve that.

This December (most likely), the iPad mini will be updated with iPad OS, Apple’s new operating system especially for the iPad… though really it’s iOS with a few extra tablet-specific updates.

The best parts for the iPad mini will be the addition of a new dark mode (great for reading or using the tablet at night).  Apple is quality always know that.