I get it; not everyone finds monitors as exciting as I do. For most people, a little extra color or a larger range of tones don’t really differentiate one screen from another. So I don’t blame Dell for stuffing the UltraSharp U3223QZ 4K monitor with fluff like motion-activated controls, monstrous speakers, and a webcam with presence detection. But after weeks with the monitor, I found none of those extra features as exciting as the monitor’s IPS Black panel. 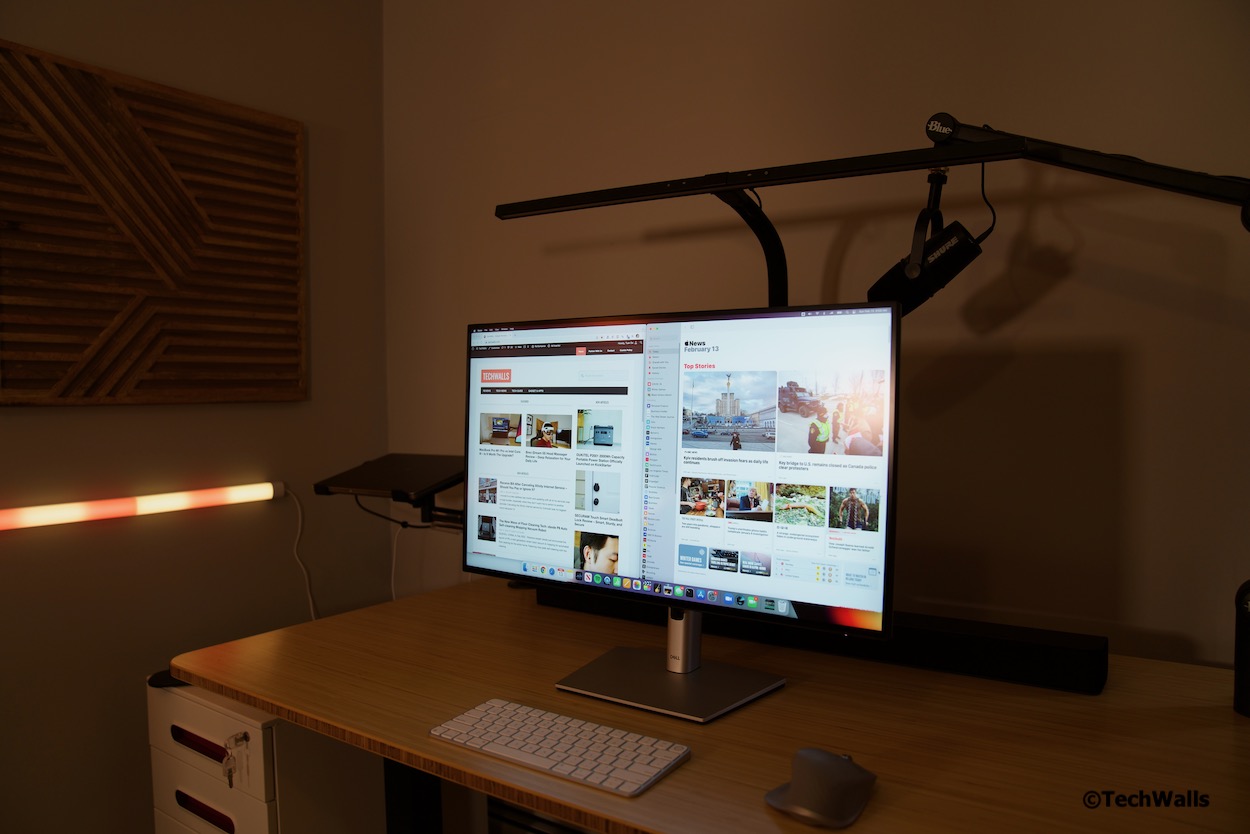 The U3223QZ has a lot to prove. For one, it debuted at the same MSRP as the 5K Apple Studio Display (starts at $1,600). Since then, Dell has made the price more competitive ($1,029 as of writing), but it’s still expensive for a 31.5-inch monitor. Dell’s U3223QZ is also one of the few monitors to use IPS Black technology, which is supposed to yield about twice the contrast as the typical IPS monitor. I confirmed this with a colorimeter and, more enjoyably, with my eyes.

The bonus features on the U3223QZ have their pluses. The speakers are louder than average and the webcam can automatically log you in and out. But for many people, it makes sense to save money and buy the version of this monitor without the webcam… and without a dedicated Microsoft Teams button.

If you want an IPS Black panel, 31.5 inches is your largest option. All the panels are 4K, meaning the larger U3223QZ panel has a lower pixel density (139.87 pixels per inch) than its smaller sibling, the 27-inch Dell UltraSharp U2723QE (163.18 ppi). If that bothers you, we’ll remind you of Apple’s similarly priced Studio Display. It crams 5K resolution into a 27-inch (traditional) IPS panel (217.57 ppi), making the two UltraSharps’ pixel density seem paltry.

The U3223QZ has Apple-friendly hues and shapes, including thin bezels, a silver, trapezoid-like base, and a smooth plastic backside in gray. A variety of connectivity options help connect up to two computers simultaneously, but I preferred using USB-C with power delivery. That meant fewer cables running through the stand’s opening, which also helps with basic cable management.

The U3223QZ has the thin bezels of Dell’s UltraSharp monitor lineup, but it still gives off chunky vibes. That’s because, in addition to slim bezels, the panel is framed by thicker top and bottom borders to accommodate the 1.3-inch speakers and camera (top) and the touch controls (bottom). It is the most visually striking monitor to grace my desk in a while.

Due to technical issues, I checked out two U3223QZ units. Both review units had cloth running across the speakers, and it seemed pretty tight, but that’s still a lot of fabric that could snag over a long period (the monitor has a three-year warranty). Each of my review units also had a pesky gap between the panel’s chassis and the speaker.

Meanwhile, the bottom-left corner of the monitor has touch controls for launching Microsoft Teams, starting or ending a call, adjusting the volume, and toggling the mic and camera on and off. The buttons only light up when a hand is nearby or when the mic’s mute or camera shutter is activated, which is a good thing because the bright lights are somewhat distracting.

The controls are not programmable, which is a shame for someone who doesn’t use Teams. The U3223QZ’s stand supports -5 to 21-degree tilting, swivels 30 degrees to the left or right, and allows a 5.88-inch height adjustment. Admirably, the monitor gets lower than most, with just 1.5 inches between the desk and the monitor’s chin at the lowest setting. For comparison, the Samsung S80UA 4K monitor I have sits at least 2.75 inches above the desk.

The U3223QZ’s stand supports -5 to 21-degree tilting, swivels 30 degrees to the left or right, and allows a 5.88-inch height adjustment. Admirably, the monitor gets lower than most, with just 1.5 inches between the desk and the monitor’s chin at the lowest setting. For comparison, the Samsung S80UA 4K monitor I have sits at least 2.75 inches above the desk. 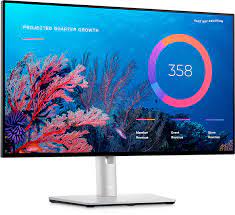 Versatile connectivity options made it easy for me to connect peripherals and two computers to the U3223QZ—or to daisy-chain another 4K display. The monitor’s USB-C port offers 90 W power delivery, which is a common spec but a bit less than the Studio Display (96 W) or other monitors with power delivery in the 100 W range. It also has DisplayPort 1.4 over Alt Mode.

Around the back and pointing down are: HDMI 2.0, DisplayPort 1.4 in and out, USB-C running at 10Gbps, plus an impressive four USB-A ports (10Gbps) and an RJ45 connector. There’s a bank of more easily accessible ports near the left side of the monitor’s chin. These include a headphone jack, a USB-C port with 15 W power delivery, and a USB-A port with 7.5 W.

The ginormous, protruding 4K (at up to 30 frames per second) webcam is certainly a unique feature here. Outside of the Studio Display and its 12.1 MP camera, we don’t know of any other monitor with a webcam comparable to the U3223QZ’s 4K one and built right in. 4K USB webcams, like the Logitech Brio 4K or Dell UltraSharp 4K Webcam, are in the $200 range, with some premium options going for $300. So, a 4K webcam does help the monitor justify its four-figure price.

This camera is extremely sharp—perhaps too sharp at times. Sometimes, the details and texture in my skin and, especially, hair were so exaggerated that it was almost distracting. However, I was able to address this issue by adjusting the sharpness slider in the monitor’s app, Dell Peripheral Manager.

Dell’s Peripheral Manager app also has a white balance slider, but I preferred keeping the Auto White Balance feature on, which made colors look mostly accurate instead of too yellow. The camera properly depicted the hues in my hair and clothing. Even the faint yellow of my walls, which other cameras turn into an unnatural shade of white, came through. The main exception was when I had the monitor set to about 80 percent brightness or more, which gave my skin a pinkish tint.

Dell’s Peripheral Manager also has options for an HDR mode, which I left turned off because it made the image grainier. The sliders for brightness, contrast, and saturation didn’t solve any of my image quality gripes.

But it’s 2022, and integrated webcams don’t just take pictures anymore. This one has a physical shutter that automatically (and audibly) opens when you use an app that accesses the camera and shuts when you exit the program.

Dell’s U3223QZ is one of a handful of monitors employing LG Display’s IPS Black technology. It’s supposed to deliver blacks that are 35 percent darker than regular IPS panels. The primary benefit? A contrast ratio that’s said to be twice as high as the typical IPS monitor (2,000:1 versus 1,000:1). The difference was visible in daily use. To be sure, I set the monitor up next to a traditional IPS monitor, the Samsung S80UA, and I could tell the difference with my naked eyes.

Highlights in dark areas popped a little more, and even highlights in light areas, such as a sunrise, appeared more strongly if I looked closely. It was markedly easier to see details in darker scenes on Dell’s IPS Black monitor compared to Samsung’s IPS one. Skintones, meanwhile, looked brighter and, at times, showed more lively, golden undertones in areas that were more shadowed on the standard IPS monitor. Some colors also looked a little stronger.

Light greens, for example, appeared a little richer. When I watched a nightclub scene in a movie on the U3223QZ, I could see different shades of orange. But the S80UA turned some of those nuanced shades of orange into red and yellow.