Sometime during the last christmas celebration, i and my family members were on our way to the conservation center and later to go see a movie. Well long story short my aunt just got back from Norway at that time and for some reasons she kept demanding that we go with a “Beemer” as she fondly called the brand.. I kept wondering why so, on the course of our drive through we got into a conversation about cars with emphasis made solely on the BMW brand.

Of course by now you know the rest as our dear women never stop talking especially when its something that has to deal with what they like.. I think after that conversation with her i had a thing for the brand but i was not really sure, i mean not until i saw this coupe with a touch of class even more sexy than the mercedes benz.

With that being said, BMW unveiled on Tuesday a concept version of its upcoming i4, an all-electric four-door Gran Coupe with an estimated EPA range of 270 miles and the ability to produce 530 horsepower, pushing it past its high-performance M3 combustion vehicle. 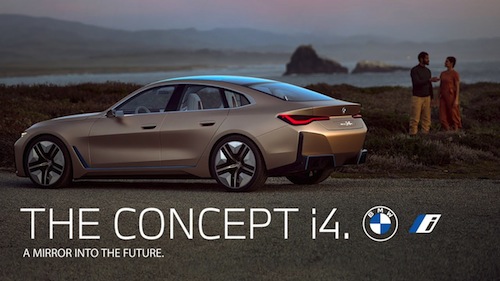 So with a bigger grille, bigger power and a 270-mile range its far from being a slush. In fact, much of what you see on this concept is either a subtle or not-so-subtle nod for what to expect on the future i4.

The overall styling looks nearly production-ready, though the blue outline for the diffuser-styled faux exhaust outlets at the rear likely aren’t production-bound. Similarly, the Interior probably won’t be as airy and minimalistic as what we see here, but keeping the i4 driver-focused is part of BMW’s plan.

The large, curved display is said to preview the brand’s future displays for the iNext as well as the i4, incorporating low-glare screens which negate the need for shrouds or housings to block outside light.

The i4 concept vehicle, which was unveiled online because the Geneva International Motor Show was cancelled due to the coronavirus, is slated to enter production in 2021. BMW has been talking about and teasing what would follow its i3 electric vehicle for awhile now. 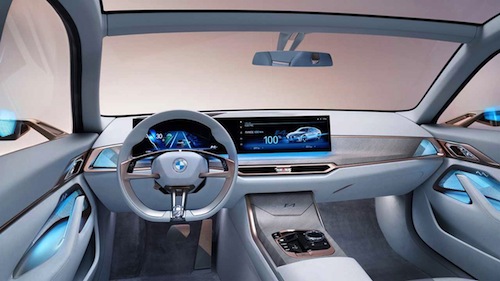 It looks very posh yeah!! lol That’s whats up. BMW incorporates three different modes into its snazzy display that the automaker calls Experience Modes. Though we are talking about a concept vehicle, according to motor 1, BMW says this setup previews the next-generation operating system it will use in vehicles starting next year.

The three modes are called Core, Sport, and Efficient, and they pretty much function just as they sound. Core is basically a tweaked version of BMW’s current arrangement where users can navigate the diagonal widgets using swipe movements to access and arrange them as needed.

Sport mode brings the widgets closer together for a focused view and also makes room for performance items such as a lap timer. Efficient mode is all about communication and how well the car is using its available power.

The concept has a long wheelbase, fastback roofline and short overhangs, suggesting that the production version will have a similar profile — a far cry from the wedge-shaped i3.

The front end shows a closed-off grille. BMW says it has given the grille of the concept a purpose beyond just a reminder of its combustion engine past. The grille will be used to house various sensors, according to BMW.

Perhaps the most noticeable features, besides the mammoth kidney-shaped grille, is the glass roof and a curved digital display in the interior.

BMW Concept i4 Back View 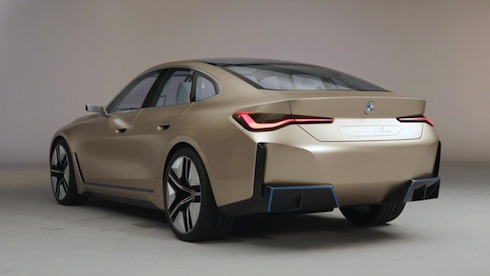 If you take a close look at the image above what you are seeing is a HP Tesla fighter, regardless of what you might think, i know it’s just a car.  While the i4 is nearly ready for production, certain details will likely disappear for road duty.

The side-view cameras might not: they’re not yet legal in North America, but other markets do allow for them. The gigantic diffuser out back will also shrink to dimensions less Le Mans. But overall, the basic cab-rearward proportions will carry over.

Don’t expect that big ol’ grille to change much either. BMW’s sticking to the opened-up waffle-iron look, though the space serves a different purpose for the i4. Closed off, it operates as what BMW is calling an “intelligence panel”, holding numerous sensors. What exactly it houses, and how it protects it all from the ravages of daily road use, is unknown. 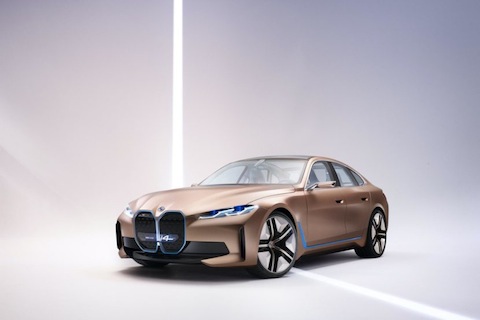 Powering the i4 will be BMW’s fifth-generation eDrive tech. A 80 kWh battery provides the charge, with 523 hp on tap — more than the upcoming M3/M4 is expected to produce. The battery itself weighs in at just over 1200 lb, suggesting the i will tip the scales at quite a bit more than any other 4 variant. Nonetheless, BMW is quoting a 0-60 mph run of 4.0 seconds, and an 80 percent charge in 35 minutes via 150 kW DC fast charger.

BMW is sticking to its WLTP estimate of 373 miles of range. On the tougher EPA scale it’s estimated 270 miles.
Flanking der waffeleisen is a pair of slit-like headlights. They keep the traditional four-eyed BMW look, but do so with only thin LEDs — no glass covers here. There’s also a new take on the classic BMW roundel on the nose, with the usual black ring now clear.