Floor standing speakers, often simply referred to as floorstanders, are typically the biggest kind of speaker designed for home use. The cabinets are bigger than those of bookshelf speakers, allowing them to project sound further across the room and with more presence and scale.

Despite their size and weight, floorstanding speakers don’t leave a big footprint. They are tall and slim, meaning they don’t take up much floor space. This makes them easy to place directly beside your television set or bookcase that supports your turntable. 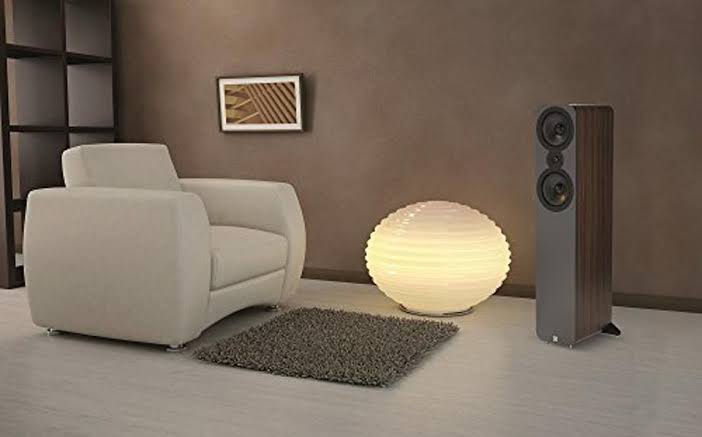 In this article we’ll be walking you through our favorite floorstanders that cost less than $1000. At this budget you’ll be spoilt for choice, although it is worth mentioning that it is not uncommon to find floor standing speakers that cost hundreds or even thousands of dollars more.

The Klipsch RP-8000F earns the top spot on the list thanks to its combination of sound quality, cabinet construction, and versatile design.

Part of the Klipsch’s Reference Premiere line, the RP-8000F is a cut above the standard lineup in terms of quality. They’ve been designed from the ground up, so while they come with all the Klipsch bells and whistles such as Tractix horn-loading, the resulting sound signature is more refined.

The RP-8000F delivers plenty of bass because of its large 8” Cerametallic woofers. This means a subwoofer isn’t strictly required, unless you want to hit lows beyond its stated frequency response (32Hz – 25kHz).

The Tractrix horn on the 1” titanium vented tweeter with Tractrix horn also makes these speakers great for highs, and that’s really where they excel. While the highs are clearly present, they are not shrill. The midrange is very clear as well.

Klipsch speakers are typically known for a slightly bright and exciting sound profile with plenty of dynamic range. This is what makes them a showroom favorite, the average consumer is easily ‘wowed’ by them when comparing them to more neutral options. It also makes them especially well-suited for home theater audio.

However, the RP-8000F feature a much flatter frequency response, so they are better suited to critical listening. While there are better options if you’re after uncolored sound, these floorstanders aren’t as divisive as many of the other Klipsch speakers on the market.

Of course, no Klipsch review would be complete without mentioning their high efficiency. With a sensitivity rating of 98dB @ 2.83V, these speakers basically go louder with less power. This means filling a large room is no problem, and you won’t have to be as picky about the amp or receiver you run them through.

Build quality is another aspect often ignored in speakers, but it’s very important. The RP-8000F speakers weigh 60 pounds each, so they feel incredibly solid and sturdy. The two finishes available, walnut and ebony, give you some choice in color. In addition to that, the finish itself looks great, and it’s furniture-grade.

Not compatible with banana clips. You must connect cables directly with a stripped wire and a plastic cap. Slightly bright sound signature makes them great for film and game audio, but for pure music listening it will depend on the listener’s preferences.

American home audio brand BIC has been around since the early 70’s. They’ve gained a reputation for offering terrific value for money, with an emphasis on sound quality over branding. The legendary Acoustech line was reintroduced in 2003 and has continually been the subject of praise in Home Theater circles. 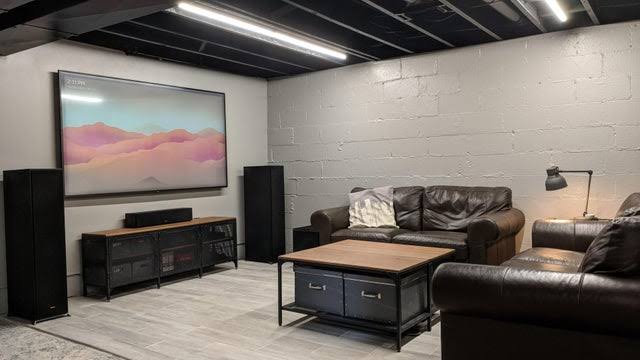 First, the 3-way design really does add a little extra depth to the mids and treble. The treble is especially nice, and comparable to speakers from Klipsch because of the horn-type tweeter. Mids on these speakers also come out clear despite the relatively small 5” closed-back driver.

Most surprisingly, the bass actually sounds good because BIC uses passive radiators – a rare choice at this price point, but one that is welcome. A good subwoofer will make the bass sound great with the mids, so I recommend that if it’s within your budget. However, it’s not necessary.

These speakers also feature a relatively high sensitivity, meaning they can go effortlessly loud for their size. In many respects, the sound profile is directly comparable to that of the RP-8000F. If you’re looking for a something slightly cheaper than the Klipsch Reference Premiere, these speakers provide a very compelling alternative.

These speakers are literal towers, measuring 47 inches from top to bottom. There isn’t anything remarkable about the design, and you don’t get the luxury of picking a finish, but there aren’t any problems with their build quality.

Klipsch is a big name in the home theater audio industry. Unfortunately, that reputation with a big price tag. Even more so when you consider things like the need for a receiver which not only adds to the cost, but also adds to the complexity of the setup.

If the aforementioned RP-8000F floorstanders prove too expensive and you don’t want to deal with the hassle of a receiver, the cheaper R-28PF are worth looking into. These are powered floor standing speakers, meaning you plug them directly into the mains.

As you would expect, these speakers have the signature Klipsch sound, largely in part because of the Tractrix horn tweeter. Klipsch also did a good job with the bass on the R-28PF, which sounds clean and precise. Large 8″ woofers mean you can do away with a subwoofer, although to hit really deep sub-bass you might want a cheap 10-inch subwoofer to accompany them.

The soundstage is impressively wide, which means that they work well very well in a 2.0/2.1 virtual surround speaker setup. We might consider adding a center speaker to make make L/R separation slightly smoother and have clearer dialogue. However, if you’re buing floorstanders for a 5.1/7.1 setup, then it will probably make sense to get passive ones and run everything through a decent receiver since there’ll be a lot of cables involved anyway.

Because they’re powered, these speakers have built-in Bluetooth compatibility so you can easily stream music to them using your laptop, tablet or phone. You probably won’t be primarily using them as Bluetooth speakers, but it is practically a necessary feature on powered speakers since most of us will play from more than one audio source.

Klipsch did a good job with the build quality on these speakers, too. Each speaker weighs 58 pounds. Unfortunately, they don’t have the same furniture-grade finish that you get with the Reference Premieres, so the finish isn’t quite as resistant to wear and damage.

The UK has a rich heritage when it comes to engineering loudspeakers, being the birthplace of companies like KEF, B&W and Mission. A more recent addition to the list is Q Acoustics who have been subject to continuous praise since being established in 2006.

If you’re looking for natural sound with a flat frequency response curve and incredible detail, you simply can’t go wrong with a pair of Concept 40s.

The sound profile doesn’t have quite as much excitement or attack as the more home theater focused Klipsch RP-8000F or BIC Acoustech PL-980L, but for easily listening the Concept 40’s smooth sonic characteristics makes for pure listening joy.

All this sound comes from two incredibly attractive cabinets, which look both modern and minimalist while also being clearly different from the run-of-the-mill wooden tower aesthetic.

The Gelcore Cabinet Construction, resonance reducing aluminium faceplate and steel-mounting feet are a testament to the company’s high level of craftsmanship. 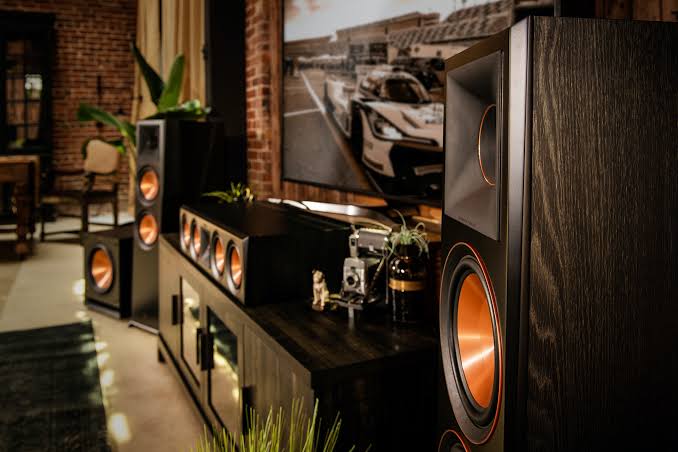 It is worth noting that while being the most expensive pair of speakers to make this list, they aren’t the loudest. The 5-inch bass woofers are smaller than what you get with the Klipsch.

They’re also slightly less sensitive than the other speakers, so you’ll need a more powerful amp to be able to crank the volume up, although that’s not really what the Concept 40s are all about.

The biggest downside of these speakers is perhaps the cost – they ever so slightly exceed the $1000 budget. Q Acoustics does fortunately throw in a high-quality $100 speaker cable with the purchase, which takes away a bit of the sting.

The pinnacle of the Debut 2.0 lineup designed by the legendary Andrew Jones, you’ll be hard pressed to find anything that sounds as good in its price range.

The Debut 2.0 series is all about delivering sound to you as true to source as possible. You don’t get the boosted mids and highs like you do on the Klipsch RP-8000F or get the smoothed out sound you find on the Q Acoustics Concept 40. However, there is incredible detail and texture to the sound.

The Debut 2.0 really shines in the bass response department thanks to its multiple reflex ports. They have the agility to deliver bass with just the right amount of punch and warmth depending on the situation called for.

Again, a subwoofer always helps but there’s no point pairing it with a cheap one, instead save for a full quality one such as the SVS PB-1000 to do them justice.

The Debut 2.0 range scores well across the board, so if you wish to develop this into a fully fledged surround sound setup from scratch, finding the center channel speaker and wall-mounted rear speakers won’t require any thought.

The build quality is also top-notch, although it would have been nice to have more choice than just the black ash vinyl cabinet finish that is on offer.

Overall, there just isn’t much to fault about these floor standing speakers from ELAC. There is no doubt that these speakers sound significantly better than what you’d expect from the price.

There’s no bi-wiring, but noone is bi-wiring towers that cost less than $400 each. A 6 Ohms impedance and 87db @2.83v/1m sensitivity means you’ll want a fairly powerful amp to get it sounding its best.

Hopefully this list of recommended quality floor standing speakers under $1000 have given you some inspiration. Floorstanders are the crème de la crème when it comes to speakers available for the home so you should take time to pick out the right ones for yourself.