What is Kindle Scribe?

Scribe is the first Kindle e-reader to support handwritten notes, using the included pen. The 10.2-inch screen also makes it the largest Kindle yet, and the battery can last for up to 12 weeks on a single charge. $339.99 from Amazon. 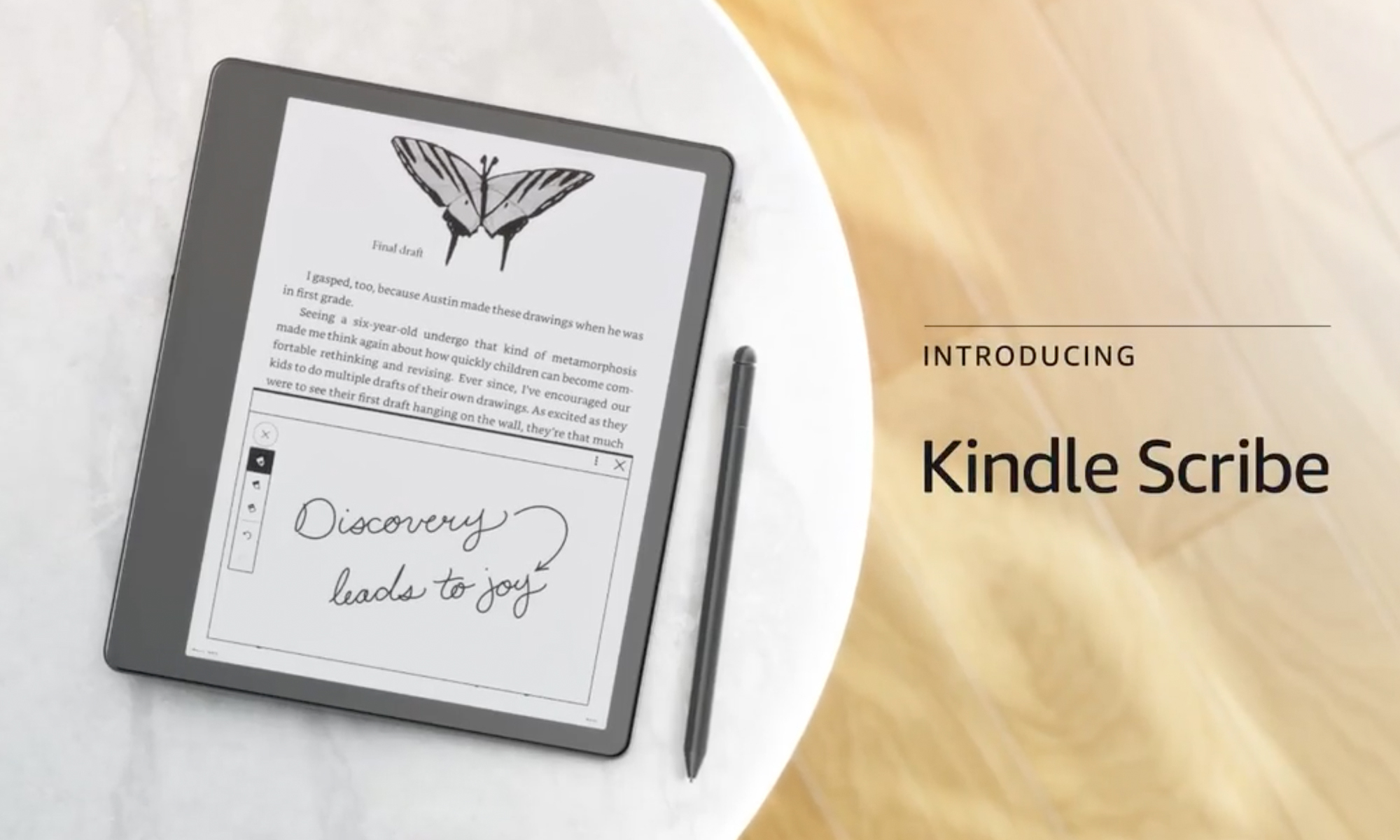 The top tablet device comes with a big screen, solid design, stylus works great and an amazing great battery life.
The Kindle has long been the go-to e-reader for those willing to work within Amazon’s ecosystem of products.

The latest in the lineup, the Kindle Scribe, however, is…different. The Scribe has many similarities to previous-generation Kindles, but with a few notable distinctions.

For one, the Scribe isn’t just built for reading — it’s also built for writing. It comes with a stylus that lets you take notes, draw sketches, and even write entire pages of text.

And unlike most other e-readers, the Scribe’s display is an OLED panel that offers plenty of crisp images and sharp lettering. But does that actually translate into an entirely different Kindle experience? Is it the note-taking device you’ve been waiting for?

The overall design of the Kindle Scribe is pretty different from other Kindles, though there are some similarities. The Scribe, for starters, boasts a larger 10.2-inch display with a 300dpi resolution – helping ensure that text is legible and crisp. To be clear, other Kindles offer a 300dpi pixel density too, but not in a display this big.

The Scribe also has a larger left bezel so that you can hold the device when taking notes and sketches. Also on the left side are the power button and USB-C port, which is slightly weird positioning, but still fine.

Unlike other Kindles, the Kindle Scribe comes with a stylus that can be magnetically attached to the right side or slotted into the cover. It’s quite slim and responsive, though there isn’t a lot of pressure sensitivity – you won’t be creating digital works of art with it.

I found the stylus to be relatively accurate and the writing experience to be quite natural, despite the fact that it was perhaps not quite as responsive as the likes of the Apple Pencil on the iPad.

There are actually two different stylus options. There’s the Basic Pen, which works fine for the basics, and there’s the Premium Pen, which costs an extra $30, and has features like an eraser on the back. Under the hood, the Kindle Scribe offers 16GB of storage in the base model, or options for 32GB or 64GB with the Premium Pen.

To support those new features, the Kindle Scribe has a slightly different software experience from other Kindles.
The main addition to the software on the Kindle Scribe is the new Notebooks tab, which is designed to give users the ability to draw, write, and save different types of notebooks in one spot. 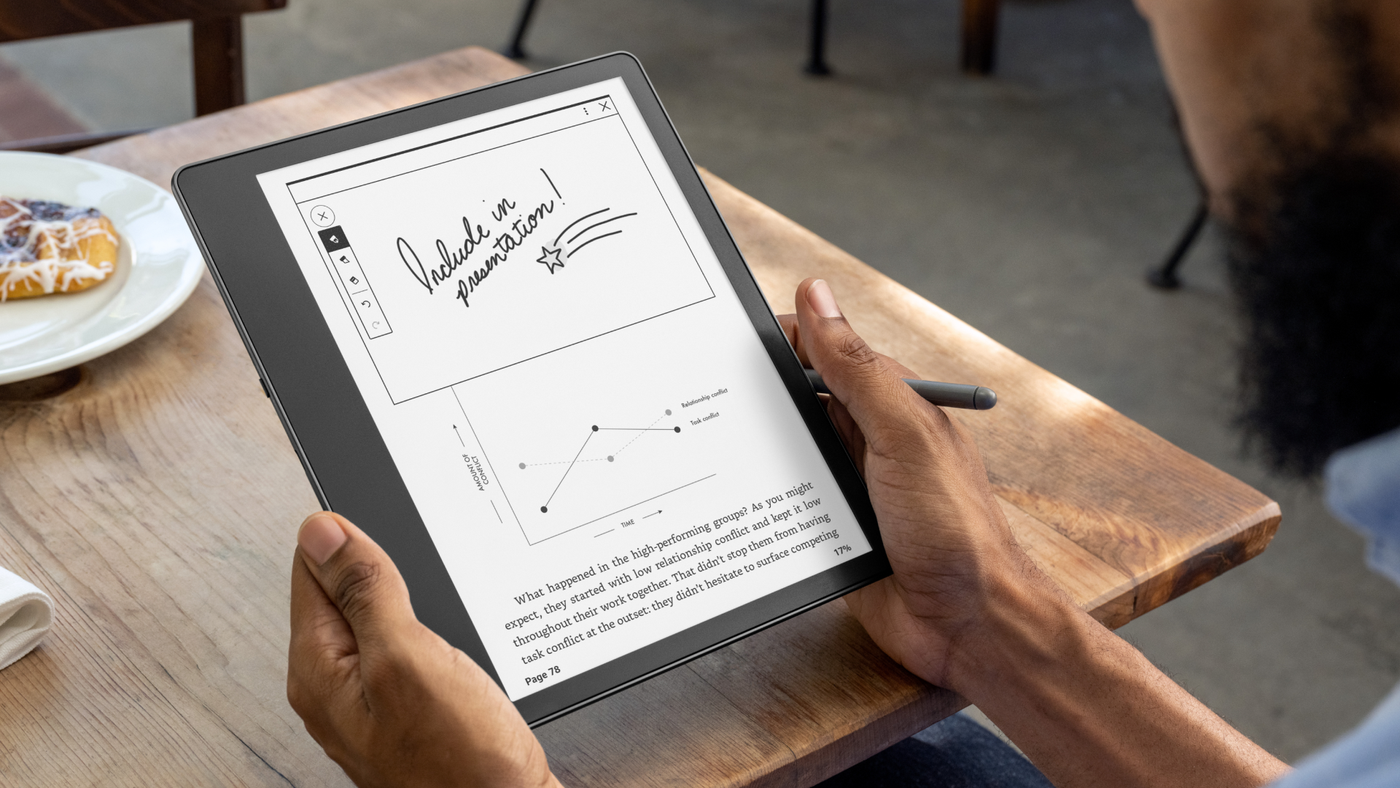 You can create as many Notebooks as you want, and they can have as many pages as you want. They can be renamed, too, so you can have different notebooks for different topics. Users can also now draw and sketch in the notes that they leave in their books, instead of typing.

You’ll get a number of different writing options when writing with the Kindle Scribe, like a basic pen, a marker, a highlighter, and so on. It’s a solid selection of tools.

I can’t help but wish Amazon put more effort into developing the software on the Scribe though. The more the company adds features to the Kindle, the more it’s going to have to contend with actually building helpful software that lets you navigate through features easily.

The Kindle Scribe is a solid e-reader for those looking for a larger display and the ability to take notes or sketches in their books. It’s well-designed, relatively compact, and offers everything you need from an e-reader.

But it’s also mostly good for being an e-reader, and less so for being an e-writer. To be sure, writing on the Scribe isn’t bad, but I’m hoping Amazon will continue to build out the software.

If you’re in Amazon’s ecosystem and want an e-ink device that you can also write on, you don’t really have much choice but to go for the Scribe. But if you’re willing to go outside of the Amazon ecosystem, you’ll find devices like the reMarkable 2, which offers better software features for writing and note-taking.

Should I buy the Kindle Scribe?

Yes, if you’re in Amazon’s ecosystem and want a Kindle that you can also write on.

No, if you’re willing to buy an e-ink device outside of Amazon’s ecosystem.