I do think that anyone born from the year 1990 knows Akon. you remember that guy the famous musician in america, he actually grew up in Dakar, the capital city of Senegal, and was raised by his father, a Senegalese percussionist, who taught him a lot about music. As a teenager, before he permanently moved back to the USA. I just found out that we are both born on the same day and that’s a plus. yeah! well now he’s a Philanthropist, business mogul and five-time Grammy-nominated artist and he has announced the signing of a formal partnership between Akon Lighting America (ALA) and leading AI-solutions provider, Group A MondoBrain. The partnership is focused on benefiting the whole of Africa, starting with the Comoros Islands, by leveraging the power of artificial intelligence in the development and delivery of sustainable energy solutions around the world. The announcement was finalized as Akon spoke at a summit on clean tech financing in Dubai, (UAE). 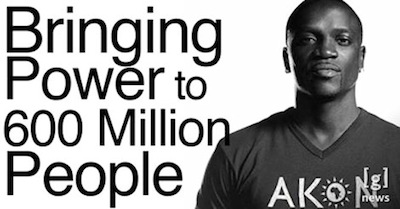 Since 2013, Akon has been actively involved in delivering sustainable energy solutions to disadvantaged and rural populations, resulting in the Akon Lighting Africa initiative with active projects in over 16 countries. Now, with Akon Lighting America, the music icon is looking to build on his experience and work with partners like Group A MondoBrain to create replicable, scalable and cost-effective utility-scale renewable energy solutions throughout Africa and for low-income housing areas in the US.

Akon said ” i’m a true believer in the ability of combined forces and partnering with advanced technologies to help combat climate change and make positive impacts in people’s lives. Integrating technologies such as artificial intelligence to our new sustainable energy solutions is a must”.

He also added ” By partnering with group a mondobrain, we are committing to turn the promise of providing efficient sustainable energy solutions by using AI technologies into living reality for people in Africa”.

According to Group A MondoBrain founders Idrisse Ahamed & Augustin Huret, artificial intelligence will be able to play a big role in furthering the mission of Akon Lighting America on a global scale. “simply stated, AI can be used to make better, smarter decisions”.

The ALA global initiative is to empower the people around the world and improve living conditions by providing the basic essential needs that should be accessible to everyone, such as electricity and clean water through sustainable energy solutions. MondoBrain is a leading provider of AI-augmented solutions with experience across the financial, engineering, and agricultural sectors with deep roots in Africa. The organization’s main offering is the award-winning MondoBrain platform, used by governments and private organizations across the world to optimize performance decisions and manage KPI’s.

Akon Lighting America is a highly qualified Minority Owned Business holding an Unlimited General Construction and Electrical License in over 15 states. ALA is a full EPC with a deep expertise in renewable energy project delivery, particularly solar farms, substation design and construction and public utility construction. The company is a robust, financially strong company with over 30 years combined experience in the delivery and management of both commercial and renewable energy construction projects.
Guy Liégaux, MondoBrain EVP also said ” we look forward to assisting akon’s team leverage data to optimize decision making at every step from solution design to implementation planning and execution”. 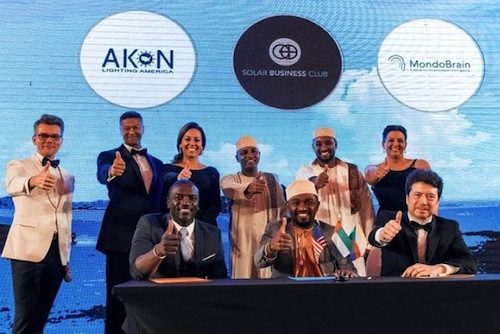 MondoBrain is the global leader in Enterprise Augmented Intelligence. The company’s advanced AI-enabled decision support suite is the first to integrate human, collective and artificial intelligence. The solution leverages a unique approach to human-centric and explainable AI to optimize performance decisions across the organization with consensus and transparency. MondoBrain clients range from manufacturing and finance to healthcare and retail and include top global brands such as BNP Paribas, Airbus, Johnson & Johnson, and Sanofi. MondoBrain is headquartered in New York City with additional offices in Washington DC, Paris, the Hague, and London.