Acer has made Android tablets for years, but it is getting into a more niche space with its first Predator-branded product for the ecosystem, the Predator 8. The Acer Predator 8 is an 8 inch HD device with a 1920×1200 display resolution ,Intel’s latest Atom X7-Z8700 processor — the same CPU on the Microsoft Surface 3 tablets, Intel HD Graphic Gen-8-LP GPU, 2GB of RAM with expandable 32 or 64GB of internal storage up to 128GB. Acer has tried to differentiate its latest offering, the Predator 8, by marketing it as the “ultimate gaming tablet”. This basically means that this particular 8-inch screen with Android on it includes vibration feedback and larger than average speakers. So large, in fact, that Acer claims that the Predator 8 is the loudest tablet on the planet. 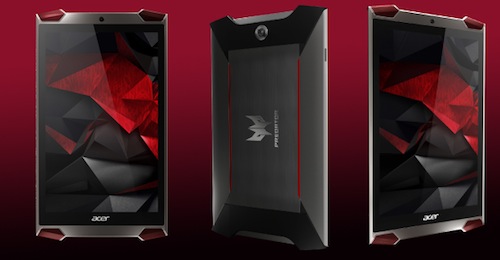 Believe it or not, Android is now a fairly strong place to be for folks who like to game on the go. The quality of mobile gaming has improved exponentially in recent years be that new names making a splash or some retro PC and console classics that are now playable in the palm of your hand. 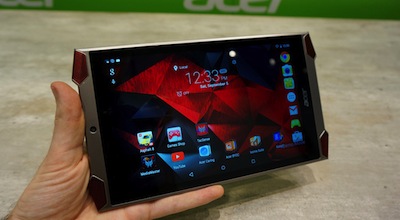 The red, silver and black case is mainly made from plastic, and is moulded somewhat, shall we say, aggressively – it’s all hard lines and angles. There’s a sheet-metal finish applied to the back and along the front edges of the device, which lends the Predator a high-end feel. There’s little denying that the Predator 8 stands out in a crowd. I mean, tablet design can only go so far, but in a sea of black rectangles you’ll have no excuse not to see the Predator coming. Equally, it’s a design that will firmly split opinions. There are those people who adore the garish designs traditionally found on gaming laptops, and there are those who would only use them while their head was inside a paper bag.

The Predator 8 adopts this styling technique. You’ll love it. If you like to have some serious sound while you’re gaming or watching video content, you’re in luck. The four front-facing speakers that provide the “audio-us” sound – Acer’s word, not mine – jut out from each corner of the tablet in suitably threatening style. Out front is a nice, if unremarkable 1920×1200 resolution IPS display. It’s pretty bright, too; several times during the review period finding myself turning it down. Underneath you’ve got some fairly normal sounding specs: 2GB of RAM, 32GB of internal storage and a quad-core x7 Intel processor. 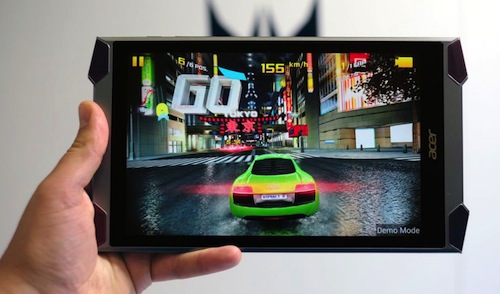 What you have here is a pretty wild-looking tablet that’s a great size and has plenty enough going on underneath to eat up even the most intense games that the Google Play Store can throw at it. Console gamers used to vibrating controllers won’t be bowled over by the feature, but it’s a nice addition for any tablet owner looking to venture outside Candy Crush into games that merit a little physical feedback. The Predator 8 is, however, mostly fantastic to play games on. As already discussed, the size is basically perfect for a tablet, the grip pads on the back are just grippy enough and the display is a good rounder. Playing a mixture of games throughout the time, ranging from Clash Royale up to Vainglory, and a few places in between. The Predator 8 hasn’t missed a beat once. You never buy a tablet expecting to be surprised by its performance, but the Predator 8 doesn’t disappoint. 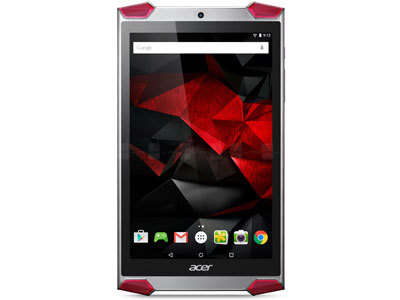 The big downer is the battery life. It’s just underwhelming. Plain old bad. In the same time that an NVIDIA Shield had dropped around 20%, we’re looking at 50% on the Predator 8. Several days during the review period I saw just 2 hours of screen-on time, dropping 10% during two or three games of Clash Royale. I did check, and Clash Royale isn’t the most battery hungry game on earth. The display is the big power muncher and it’s not lasting nearly long enough for extended gaming periods or watching more than a solitary movie away from the power outlet.

This awesome gaming tablet is on sale for the price of (NGN) 10,796 naira and can be purchased on any e-commerce outlet close to you. Or any mobile retail outlet in your region.